How a group of determined citizens and scientists found the truth and prevented more deaths.

Dan Fagin received the 2014 Pulitzer Prize in Nonfiction for his book, Toms River: A Story of Science & Salvation. He is the Director of the Science, Health and Environmental Reporting Program at New York University, has held several fellowships throughout his career and spent fourteen years at Newsday as an environmental reporter.   Toms River: A Story of Science and Salvation also won three other awards for outstanding Journalism. He also wrote Toxic Deception: How the Chemical Industry Manipulates Science, Bends the Law and Endangers Your Health 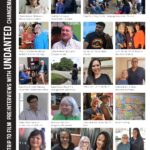 Pre-interviews with Black and Native American changemakers tapping ancient traditions to right old wrongs and blaze a trail towards an economy that works for everyone.

Documentary is in the works with phase one fundraising from grants in process to fund professional crew to return for in-depth interviews with changemakers. Documentary to be released in 2023.

Enjoy a delicious dish while viewing one of our enlightening videos with others. Innovators shared their favorite dishes and you can find their mouthwatering recipes here.

The Earth Charter is an international peoples' agreement on principles for a just, peaceful and sustainable world. It was launched at The Hague in 2000. The Earth Charter's sixteen principles serve as the ethical framework for the CIA. Learn More: CIAction